Cortex is the house system used by RPGs made by Margaret Weis Productions. My work for Cortex appears in the Cortex Hacker's Guide, where I contributed some rules for playing mutant animals (teenager ninjas or otherwise) and developed what we called Cortex Action, the rules most famously seen in Leverage. The first three inclusions here provide additions to Leverage, the last uses elements from several Cortex games to make a RPG set in the Android universe. Like everything here it doesn't stand alone - you need a Cortex game to run it (but you can get an intro to Cortex supercheaply with this or this).﻿

Leverage is a nigh-perfect game for a glorious show. But by so studiously following its source material, it leaves out one of the classic tropes of heist and caper works: The Wheelman. You can fix that with this little supplement I wrote.

I love Archer. I love Leverage. It's not a perfect fit, but it works. This contains 8 crew (Sterling, Lana, Mallory, Pam, Cheryl/Carol, Cyril, Krieger and Ray) and an adventure to run. Just perfect for a convention or a one-off session!

When I like a game, I feel compelled to write for it. After reading Leverage, I wrote out a whole bunch of characters for people to use, some based on existing properties (like Burn Notice and The Usual Suspects) and some original ideas. Great for doing a no-prep pregen game or setting up a competition crew, ala the 2 Live Crew Job. Following that is thirty six new talents. Some of them duplicate stuff that later appeared in the awesome supplements for the game, others do not. Use and enjoy! 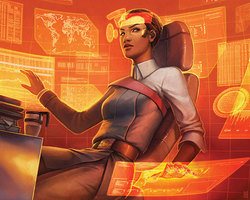 The future is a dangerous place, perhaps no more so in than in the city of New Angeles, below the mighty Beanstalk that carries freight back and forth to our new colonies on Mars and the Moon, built by clones and bioroids, the next steps in human intelligence, give or take the human part. The world changed. Crime did not.

Welcome to the world of Android, as seen in the eponymous games Android, Android: Infiltration and Android: Netrunner. This is an RPG that lets you similarly step into this world. It should be used in conjunction with the Android fan wiki.